The RH Universal is a derivative of the pilot 2nd generation RH amplifier project – the RH88. When I was working on the 2nd generation design, my main goal was stunning simplicity and lowest possible parts count. The concept was tested on 6550 tubes, both tetrode and triode connected, confirming in practice the auspicious simulation results, and showing that there is no difference in sound between triode and tetrode connection, except for the lower power obtainable in triode mode. While this makes operation of tetrode/pentode tubes in triode mode just a waste of available power, it does however open the possibility to adopt the 2nd generation circuit with triodes, as in the pilot project RH300B. 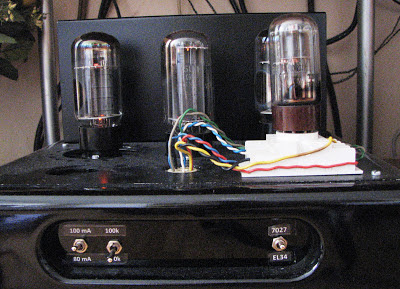 The 2nd generation circuit however requires relatively high voltages, basically excluding many possible driver tubes and making it unsuitable for many output tubes. The original RH Universal pushes this concept to the limit by making it possible to create adequate operating conditions for a range of tetrode/pentode tubes: with a fixed current draw, anode voltage is simply adjusted by means of changing rectifier type. Thus a wide range of output tubes can be used to full output power – at the expense of strict driver tube limitation (ECC81, eventually ECC82), and low input sensitivity. While low input sensitivity should not be a problem when a good active preamp is used, the driver inflexibility is in stark contrast with the output tube universality. 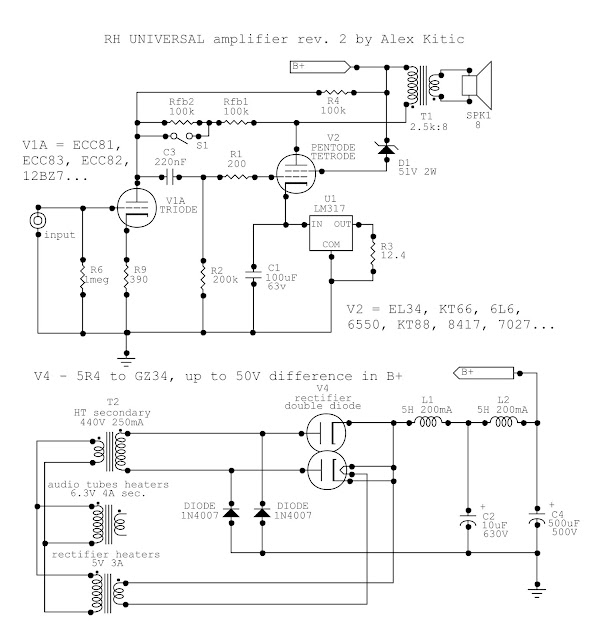 With a couple of modifications to the original RH Universal circuit, here comes a version 2 – now (almost) totally universal! The basic differences are:

The advantages of this version 2 can be summarized as:
A further advantage of the driver universality is the possibility to make an “all octal” version of the amplifier, as 6SN7 and 6SL7 can be alternated with excellent results – and similar tubes like the Mullard ECC35 can be used as well. 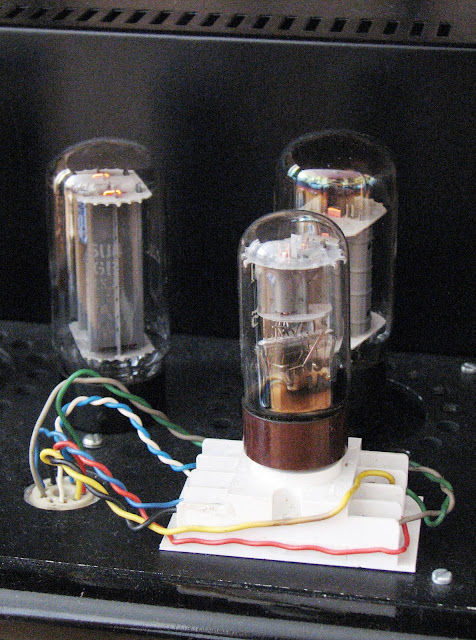 While modification of original RH Universal amplifiers is quite simple – the basic difference is one switch and two added resistors per channel – the v2 does not supplant the original. Besides being simpler, maybe more elegant, the original has a slightly different sound due to the 2nd generation driver circuit. The v2 sounds like an RH84 with lots of power, while the original version offers a slightly different nuance to the sound. It goes without saying that nuances are to be heard and judged based on the same passive and active components – the output transformers, caps, and resistors have an important sonic character which cannot be circumvented by simply changing the active components. The perfect combination may be completely individual, and the RH Universal allows for a wide range of active components alternatives on the same passive platform – a range now considerably widened with the version 2 update.
Posted by Alex Kitic at 12:56 AM