After more than a decade since the original RH84 was designed, I feel that this 1st generation RH design could benefit from a revision updating it to my current design views and correcting some decisions made in a previous time with solutions that are, perhaps, more matured. 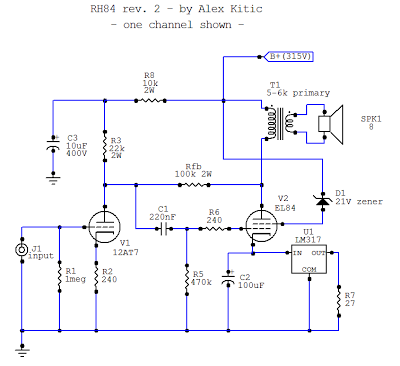 The schematics of this revision 2 does not stray too far from the original design, as all the most important design choices and component values are still there. What are the revised issues?

The original g2 resistor is now replaced with a zener diode, allowing for a more constant voltage on the second grid, and actually correcting a slight issue with Ug2 which has been observed with several builds. Depending on the DCR of the primary of the output transformer chosen for the build, the voltage of the 2nd grid tends to be higher than the anode voltage. While this is not a particular problem in practice, it is rather annoying and imprecise.

By replacing the grid resistor with a zener diode (in the schematics 21V) a stable voltage drop from B+ to Ug2 is made possible, where the zener diode value is chosen to be higher than the expected voltage drop across the primary of the output transformer. Most builds were made with smallish output transformers (sometimes from old console amplifiers) with a DCR of 200 – 270 ohms. As the anode current is approximately 40mA, the voltage drop lies between 8 and 11V: thus it is safe to assume that with a 21V drop from B+, the resulting Ug2 will always place the 2nd grid on a lower potential than the anode.

The lower the Ug2, the less will be the total current draw of the tube, and in particular less current will be drawn by the anode – if automatic or fixed bias is applied to the cathode or the 1st grid, respectively. This sets some limits as to the value of the zener diode, since too low Ug2 could cause the output tube to draw less current than intended (or needed for a given performance). The potential current draw issue is addressed by the next revision.

The second important revision in the RH84 schematic is the replacement of the cathode resistor (automatic bias) with a CCS (actually, current sink) fixing the current draw of the tube. Fixing the current draw of the tube with a simple circuit (LM317 + current setting resistor) allows a constant current draw regardless of the tube inserted. Besides the fact that no tube matching is necessary (particularly in SE amplifiers), this relieves the user or DIY builder from all concerns, including tube aging – as the current draw will have to remain the same throughout the life of the output tube. Of course, there are limits to everything – thus tubes reaching the end of life should be replaced with new or less aged ones.

The current setting resistor is chosen for a standard value (27 ohms) and needs to be checked for exact value, as well as reasonably matched between channels: 1% metal film 1/4W units should be just fine. The cap bypassing the current regulator needs to be at least twice the “bias” value (voltage drop from cathode to ground): for an EL84 22V is a good starting point among standard values. Needless to say, the LM317 needs to be isolated from ground and from the other channel’s LM317, while some basic heat-sink can be provided but is not strictly necessary, since the dissipation of each unit will be approximately 0.41W, a value most LMx17 in TO-220 package can handle without a heat-sink.

Power Supply for the RH84

When I designed the RH84 I was more interested with the audio part of the amplifier, than with the power supply the DIY builders would choose. While some understood and applied this “free to choose your own” concept, some had problems calculating correct values or choosing adequate components. Some mistakes in the power supply schematics part (lapsus calami) did not help in the process… 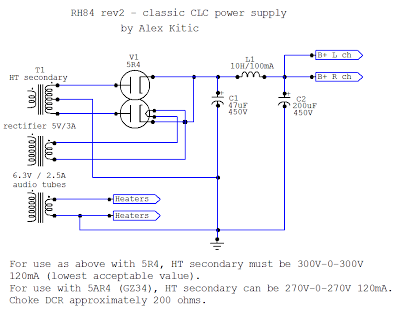 The first proposed power supply is a classic CLC type resembling the original proposal. The amplifier draws (both channels) slightly less than 100mA and the voltage foreseen at the B+ point (actually, C2 voltage) is approximately 315V. This time, all values are given – and are to be regarded as the necessary minimum – DIY-ers are free to build the amp with oversized power transformers, although oversized power supplies are not particularly necessary in SE amps since there is a very slight difference in current draw during operation. 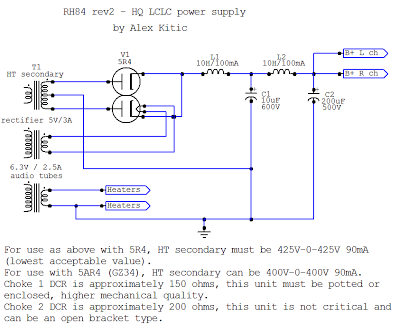 Particular attention should be given to the choice of the input choke – it will be prone to vibrations, and thus needs to be a potted or enclosed unit, as stiff as possible. Care should be given as well to the positioning of this choke, since it will have an important magnetic field due to the difficult task. On the other hand, the second choke does not need any particular attention – it sees low voltage swings and its task is just smoothing the ripple on the rectified AC. It can be the same choke as used for the CLC power supply version – an open frame unit will do just fine if it can handle the current (100mA).

Compared to the original RH84, this second revision should improve both the sound and the general operation. While RH84 amplifiers did not pose particular operation problems due to the simplicity of the design and overall stability – the fact that the output tube current draw is fixed, as well as a fixed g2 voltage, contribute to a general improvement of stability in operation, as well as predictable performance throughout the lifetime of the output tubes (the lifetime of the driver tube being longer by default).

When it comes to sound, both revisions lead to improvements, particularly in the reproduction of lower frequencies. While some might criticize the adoption of a solid-state current source, or a solid state zener diode, both devices are readily available and cheap – and used as in this amplifier can only help the performance while not introducing any superfluous noise or distortions to the sound. The current source (or sink) under the cathode is effectively bypassed since the capacitor provides an effective AC path.

The proposed revisions have already been implemented in the RH Universal, a 2nd generation RH amp. Basically, those design points have transformed the RH88 (for KT88 and 6550) into a universal amplifier accepting a wide range of output tubes – most of which are still in current production. While the RH84 is not universal, the proposed revisions add universality to the schematics, allowing its direct application to other similar but not identical tubes, like 6V6, 6F6, SV83 (6P15P), and 6L6G (6P3S). Basically, the RH84 revision 2 can be built using any of the above tubes without any modification – except for a choice of g2 zener value necessary to provide the safe voltage. For use with SV83 a 100V zener is recommended, while for most of the other tubes mentioned a 51V zener would be a fine precaution.

All existing RH84 amps can be easily modified to the revision B version – it is necessary to replace the g2 resistor with a zener diode, and to replace the cathode resistor with an LM317 with current setting resistor. The proposed power supplies are meant for all who intend building an RH84 from scratch (or any of its derivatives with 6V6, 6F6, SV83) – it is not necessary to replace existing power supplies with those, but a B+ of 315V (or less) is necessary for the safe application of the revisions.
Posted by Alex Kitic at 4:44 AM 32 comments: