The RH-307A has undergone further development, with the aim to improve output power and explore the possibilities of the circuit, as well as to improve reliability - achieving the same project quality other RH amps are known for.

I have initially considered the 15W dissipation rating of the 307A tube a limiting factor, and the 9.1W output foreseen in the datasheet as overly optimistic. Thus the circuit was developed around the 2nd generation RH driver circuitry idea - using the feedback resistor as the only anode resistor. This circuitry inevitably leads to a limitation in power output: graphically represented, the sine wave of the driver tube is in opposite phase with the sine wave of the output tube – and the peaks of the two will inevitably collide at a given power output, unless the difference in potential between driver and output tubes is larger than the combined voltage swings. The latter is virtually impossible to achieve at common operating voltages, and represents a limitation to the output power – which does not necessarily represent an important factor if the output power cannot be much higher anyway due to other limitations, like the anode dissipation of the output tube.
The 307A has actually shown itself as an unexpectedly powerful output tube, which probably due to its direct heated nature largely surpasses the output power of other pentodes with similar maximum anode dissipation. Thus the next step was the introduction of a “classic” RH driver circuitry, albeit of the more “modern” style that can be found in the RH Universal v2. The resistor ratio (anode to Rfb) is slightly skewed, although the purpose of such values is not limited to confusing the critics or those who taught they knew everything that was to be known about the subject of anode to anode feedback… Anyhow, this type of circuitry does not limit the output power by colliding the two sine waves, thus power is only limited by the characteristics of the output tube.

Some 307A (VT225) tubes will exhibit a tendency towards screen grid arcing at voltages near the maximum operating condition as shown in the datasheet. In practice g2 might arc (particularly at power-on) if operated near 300V, and this arcing actually happens towards the nearby g3, since the suppressor grid is connected to a low potential point (the cathode or virtual cathode point).
This does not occur with all 307A tubes, nor does it manifest itself regularly in affected tubes. Most documented cases where this tube was used in amplifiers are related to triode strapped operation, thus arcing has not happened as most tie both g2 and g3 to the anode. In pentode operation, tying the suppressor grid to the screen grid, or the anode – would cause the appearance of the “tetrode kink”, with all the negative consequences, and is therefore out of the question.
A very easy solution to this problem is operating the 307A in pentode mode with lower screen grid voltages – conditions that this “filamentary pentode” was actually intended for as a transmitting tube. I have thus made the choice to set approximately 200V as the g2 operating voltage – a value totally safe from arcing in all conditions on all of the 307A tubes I have tried.
With solid state devices in the circuit, like zener diodes and voltage/current regulators, the arcing which has otherwise not damaged the tubes or other parts of the amplifier, has succeeded in killing both the zener diode and LM317 on the interested channel… as a further reliability measure, and also after reconsidering carefully the datasheet, I have decided to connect the suppressor grid (g3) directly to ground, instead of connecting it to the “virtual cathode point” as it would have been customary and usual. When g3 is grounded, the arc from g2, if it ever happens, will miss the cathode and relevant circuitry (LM317). Also, it should be taken into account that the operation of the 307A can be controlled as well by the suppressor grid, and the potential at which it is set – another good reason to connect it directly to ground (i.e. 0V).

Operating the screen grid at lower voltage means that the anode will draw less current with the same cathode to control grid voltage differential. If this amplifier had a cathode resistor, the value of the resistor would have to be adjusted. But since the current draw is controlled by a current setting device (LM317 with current setting resistor), the result will be a lower cathode to control grid voltage differential, about 15V instead of the almost 30V of the original version where g2 was operated at 300V.
Needless to say, loosing 15V less in the cathode circuitry means drastically cutting on the dissipation for the LM317, with all the theoretical and practical reliability improvements. This also means having 15V more across the tube (anode to cathode) which leads to an increase of anode dissipation since the current is fixed. While some have reported operating the 307A tubes at 22 or 25W dissipation, and 80mA current, I have chosen to stick to the values given in the datasheet – 15W maximum dissipation and 60mA maximum current (set to approximately 43mA anode current). Since the 307A/VT225 is not a tube in current production, and the stock is going to dwindle in years to come, although I think that life is too short to be squandered with sub-optimal solutions – there is no need to burn your (rare) tubes too quickly.
Since the tube is forced to conduct a set current, this means that the characteristics change – a lower input signal will lead to the same output power – the sensitivity of the amplifier increases almost twofold. The effect of this change is obviously audible – the amplifier is more dynamic sounding than the original version: the percussion attacks are more pronounced, it seems as if the amplifier has gained speed. If “syrupy” is how many would define classic 2A3 and particularly 300B SE amps, this is quite the opposite.
The change in screen grid operating point is achieved by increasing the value of the zener diodes. While it could be easily achieved using one 150V zener diode, two 75V 5W zeners are a far better choice. It goes without saying that the power of the zeners needs to be quite high, since their power rating is greatly derated with temperature (and tube amps tend to be warm or even hot). Still, a 150V 5W zener should do, but its dynamic resistance is much higher than the dynamic resistance of two 75V 5W zeners in series – this dynamic resistance is obviosly very important to achieve the particular sound in amplifiers where zeners are used to drop voltage and set the g2 operating point.
The zeners used to drop voltage to screen grids (instead of resistors) seem to be susceptible to performance degradation, and the result is a relatively fast decay in bass (low frequency) performance. This is a topic which, unfortunately, is totally un-documented elsewhere on the net! The results of zener performance degradation can be easily experienced experimentally by connecting a grid stopper resistor between g2 and zener diode – the bass will be filtered and bass levels lowered, as if some RC filter was introduced. Removing the resistor restores low frequency extension, and the same effect can be experienced when a degraded (but otherwise normal in operation) zener diode is changed for a new zener diode of the same type.
Of course, one way to avoid this issue would be supplying the screen grids from a regulated source, or even an additional power supply… but besides being large and complicated, this solution would also miss one important issue – the specific sound achieved when screen grids are connected to the B+ via zener diodes. Thus the “free lunch” solution would be using zener diodes of much higher power, possibly achieving the desired voltage drop by putting them in series, and, last but not least, keeping them as cool as possible by physically separating the zener diodes from sources of heat – for instance, not soldering the diodes directly to the g2 pin…
The series of two 75V 5W zener diodes, placed separately and not soldered directly to the sockets or to the anode resistors, definitely solves this issue with the least of cost and complication – while keeping the particular sound character.
The classical driver circuitry removing swing limitations allows to obtain full output power, but also more freedom in the choice of driver tubes. In this case, it meant getting back to the ECC81 family of tubes, and in particular to the 6201. It is more than obvious that an amplifier will work as foreseen by the simulation or mathematical calculations based on the schematics – but there is more to sound than simulation or mathematics. While circuit simulation with good models allows setting the best values for resistors and estimating frequency response, power output, and distortions – the quality and intrinsic characteristics of the tubes used will have an important influence on the sound, which cannot be simulated. Just like the 6AU6 pentodes are no match sonically for the 6201, or the E180CC, the E88CC is also not playing in the same league. While my choice of 12AU6 was relatively limited (although RCA black anode always means high quality in my dictionary), I had a lot of various ECC88 family member to play with… even the famed CCa does not come close to the sonic performance of the 6201 as a driver in RH amplifiers. Getting back to the ECC81 family, and in particular to the 6201 – is like the “return of the King”. 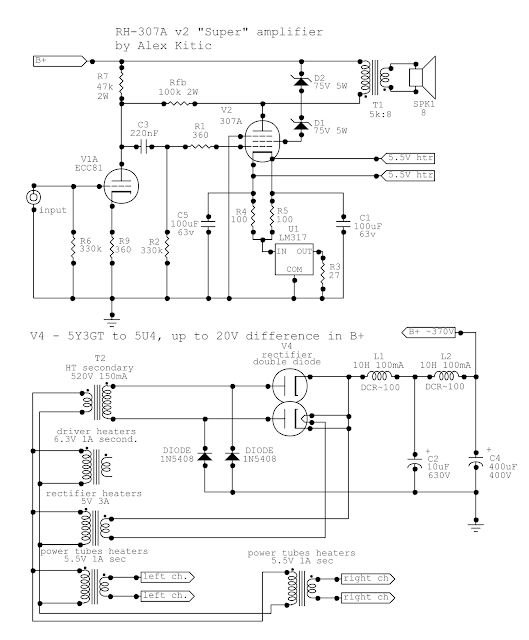 Well, after solving the reliability issues, improving sensitivity and speed, and changing to a preferred driver, I became aware that the small output transformers are probably a limiting factor, since the amplifier is already capable of sound volumes way higher than the RH84 (the SE version). Thus the small output transformers capable of maybe 5W output have been swapped for larger units (E108 size lamination).
Larger than necessary output transformers are regarded as a trade-off, most are afraid of bandwidth losses (high frequency loss due to higher parasitic capacities). Not in this case… the output transformers used are 5k into 8 ohms, with primaries foreseen for 100mA DC current: if output transformers could be estimated by power, these would probably be rated around 25W. While this looks as a total overkill, the results are awesome with this amplifier: not limited by the small output transformers, the bandwidth extension is nothing short of astonishing, and output power is almost at RH-Universal v2 levels. This should come as no surprise, since the WE datasheet states 9.1W output power at 300V across the tube into a 4.5k load. With 350V across the tube, anode to anode feedback loop, approximately 43mA anode current draw… if the datasheet is of any relevance, no wonder there are about 9W of undistorted output into a 5k load. Thus the “Super” in the name of the amplifier – if built with adequately sized transformers, it will undoubtedly outperform classical 300B SE amplifiers both in sound and power output.
Posted by Alex Kitic at 5:42 AM 4 comments: